The Boss Always Sits In The Back - A Memoir 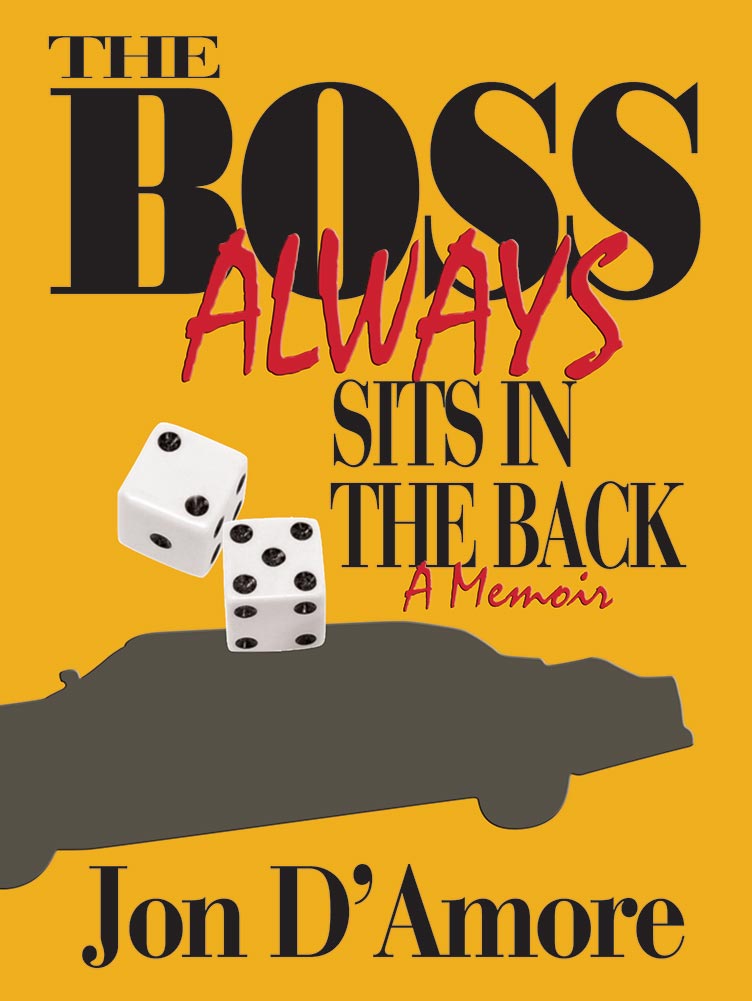 Jon D’Amore, the storyteller, was born and raised in New Jersey, right outside of New York City. His closest relatives, such as his father Carmine and cousin Jerry…who also happened to be his Godfather…were connected with the Lucky Luciano and Vito Genovese Mafia Families.

Jon had no desire to be a part of the family business and followed his dream of becoming a musician.

In 1975, for Jon’s 22nd birthday, he’s invited to Las Vegas by his Godfather…where Jon unsuspectingly…then willingly…participates in a scam that funnels millions of dollars out of several casinos.

He becomes part of Vegas history once the scam is exposed…as it forever changes gambling laws in Nevada and everywhere else in America.

Through family affiliations, Jon is summoned by New Jersey’s Mob Boss, Rocco Casiano. Through young Jon’s knowledge of recording studios, he saves The Boss from 40 years in prison and is suddenly looked upon by the Mob Community as their honorary Godson and christened ‘The Kid’…while not wanting to be involved at all. He just wanted to continue his music career.

Over the next few years, Jon sees, hears and becomes part of the inner circle of a cast of characters…like Tommy ‘The Irishman’ Dolan, Taz Costa, Big Mike Caruso, Little Sally Della Osa, Al ‘The Tailor’ Nucci, Louie Calderone, and many more…yet he wisely manages to keep his distance.

Today, most of these characters are dead…we’re even told how and find out why. One of them was banished from New Jersey and never allowed to return. Some are away…and will be for years.

Throughout the story, The Boss’s fears turn into paranoia…and paranoia turns into cold-blooded murder.

The Boss Always Sits In The Back isn’t “just another mob story.” It’s one of a young man’s loss of innocence in a world based on love, honor and respect. Jon watches as that respect turns into duty…and that duty is an order to serve Mob Justice and kill The Boss.

From the sidelines…Jon is there.

But before Jerry died, Jon had him tape-record the details of what happened behind-the-scenes…the things Jon never saw…but knew happened.

This is an account of one of the greatest scams to hit Las Vegas…one that’s NEVER been exposed in print or film before. It’s also a story about the demise of the mobsters that ran New Jersey.

Get The Boss Memoir HERE

“Jon D’Amore takes us on a perilous, hysterical adventure into the inner workings and inner sanctum of mobster mentality as only a family member can. With a roll of the dice, we’re careening along with Jon in sumptuous 1970s Vegas hotel suites and at the crap tables. He breathes Technicolor life into characters who never, ever become caricatures. Yes, there’s sex, murder, mayhem, blood and plenty of retribution, but there is also living, breathing humanity found in these pages, proving that even mobsters have heart.” - Pamela Des Barres, journalist, rock historian, sexual pioneer, screenwriter and three time bestselling author of I’m With The Band, Take Another Little Piece Of My Heart and Let’s Spend The Night Together

“Jon D’Amore has lived this life from the inside. But he knows very well that in many ways these are ordinary people who are living extra-ordinary lives, caught up in an amazing and sometimes violent journey and in a clash of cultures many other people would not understand. His account is of someone who has been there and done that, and somehow survived when many he knew did not.” - Al Sullivan: Journalist for The Hudson Reporter, and author of Everyday People: Profiles from the Garden State

“The Boss is an entertainingly funny and sometime too real look at life on the darker side. Coming from someone who’s been there, done that, this fascinating read really hit home. Jon D’Amore masterfully crafts his life’s adventures into a hard to put down book. A staggering triumph!” - Georgia Durante, author of The Company She Keeps, an autobiography of her life in the underworld

“Long before The Sopranos were even a thought, Jon D’Amore knew the real guys from the inside out - he knew them as well has he knew the back roads of his native Hudson County, New Jersey -- and as one thing led to another, he found himself playing a key hand in a gambling scam that baffled the best minds in Las Vegas. Jon was there, he saw it all and lived to tell the alternately hair-raising and hilarious tale. Read his story, and you’ll never again wonder why The Boss ALWAYS Sits In The Back!” - Lisa Tracy, author of Objects Of Our Affection and Muddy Waters: The Legacy of Katrina and Rita

“There aren’t many people who know life in the mob like I do, but Jon D’Amore’s story hits the nail on the head. He understood the respect that needed to be shown to men who could either protect him or end his life in the blink of an eye. The Boss Always Sits In The Back is without a doubt a wonderfully gripping-yet-humorous account of the way it was in Vegas during the mid-to-late 1970s and the men that not only made history.but changed it. It’s a good thing Jon was one of the survivors so he could tell everyone about it.” - Frank Cullotta, an original member of The Hole In The Wall Gang and co-author of Cullotta and The Hole In The Wall Gang