Based on a story by Steve Barr & Jon D’Amore 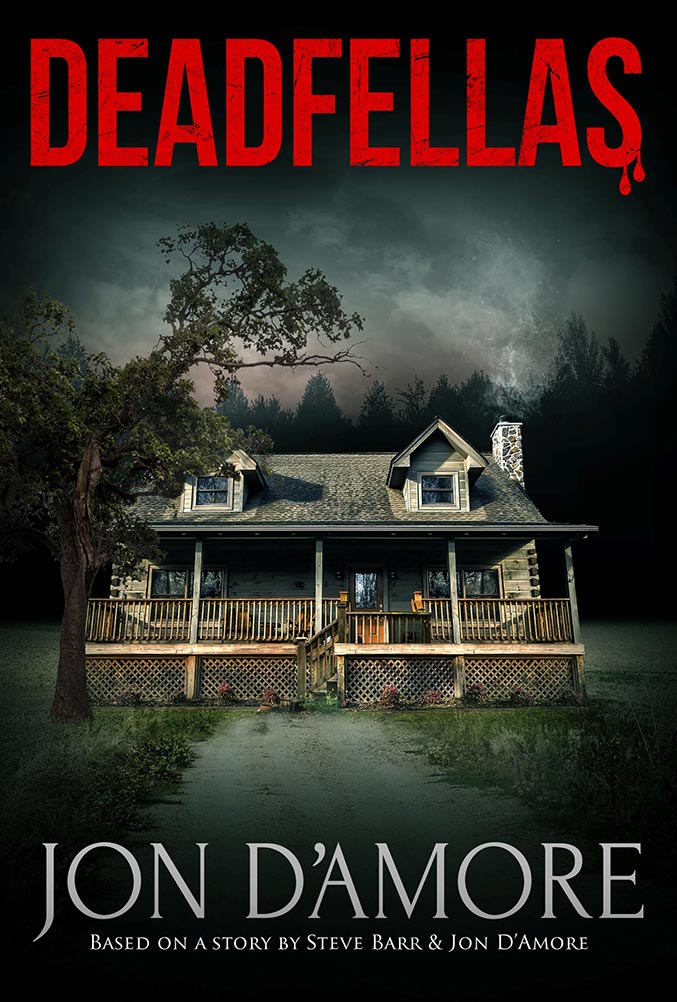 New Jersey mob boss, Giuseppe ‘Joey’ Ponti, assigns his trusted lieutenant, Carmine ‘Chickie’ Santorella, to find out why the family’s casino is losing money. Chickie and three mob soldiers, Bobby Battaglino, Richie Paldino and Sammy Trombino, travel to a small Nevada town, kidnap the casino manager and take him to a secluded cabin that has been used for mob executions for decades.

Unfortunately for them, by torturing the half-Shoshone/half-Italian casino manager, they invoke an ancient Native American curse which awakens the buried dead to hunt them down. Whacked gangsters, stoolies, lawyers and hookers crawl out of their graves with only one thing on their decomposing minds…kill the four mobsters.

It’s mobsters versus monsters when Chickie and his crew, along with Dallas, China and Jenny (three hookers who wind up in the wrong place at the wrong time) fight for their lives against scores of reanimated Mafioso.

Ready to take on the undead, Jersey style? Get Deadfellas HERE

Back cover blurbs for Deadfellas

“Jon D’Amore’s Deadfellas has my two favorite elements, history and Mafia stories. I love the building of each character, which always makes for a classic gangster tale. Then out of the blue, it becomes The Night Of The Living Dead and Goodfellas all in one. I couldn't put this book down. Great writing and a great story. ★ ★ ★ ★ ★ stars! Oh, and my two big hits with Rod Stewart are in it. Awesome!” - Carmine Appice, legendary drummer of Vanilla Fudge, Cactus, Rod Stewart, King Kobra. Bestselling author of Stick It! My Life Of Sex, Drums & Rock 'n’ Roll

“So you wondered where all those dead mobsters were hanging out? Forget the Corleone family and their lakeside cottage. Skip New Jersey’s meadowlands and head for Nevada. In his ingenious new book Deadfellas, Jon D’Amore mingles mob lore with a wacky zombie jamboree to come up with the best read since The Boss Always Sits In The Back. And speaking of the boss, you may find him out there too - along with damsels in distress, one genuine hero - and a denouncement that will leave you laughing and shaking your head as D’Amore’s sly humor and his firsthand knowledge of 'the family’ provides the perfect - shall we say - payoff. Get an extra copy. You’re going to want to share this one.” - Lisa Tracy, author of Objects Of Our Affection and Muddy Waters: The Legacy of Katrina and Rita

“If Mafia fiction is like an Italian meal, then Jon D’Amore is a master chef serving up a banquet of wise guys, mob bosses, hit men and casino scams. But this isn’t your grandmother’s spaghetti. D’Amore has seasoned the sauce with ancient Indian curses and a liberal helping of the undead. Every mouthful of this delicious mob/zombie fusion will satisfy your craving for extra helping.” - Steven W. Booth, co-author of The Hungry zombie series

“Besides Jon D’Amore being a stand-up guy, a goombah you can respect, from page one of Deadfellas you know he’s creating from his life’s experiences. I always knew he was a great writer, but this is a real piece of work. I suggest buying a copy, or you’ll be getting the 'Moe Green special.’ And don’t forget the cannoli.” - Robert Rhine, Deaditor-In-Chief of Girls And Corpses Magazine